To: Party leaders and Members of Parliament

The Austerity Agenda and Harper's Attack on Women

Elsie was turned away from a women’s shelter in Hamilton.1 Marie-Josée worked with native women on health issues until the healing centre where she worked closed for good.2 Ariella makes significantly less at her clerical job than the men at her government agency.3 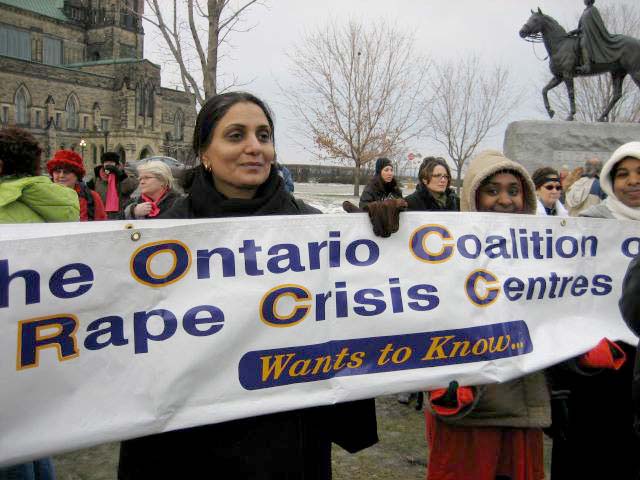 Protest against Status of Women cuts in Ottawa, 2007.

At Status of Women Canada–the government agency charged with protecting women’s rights– the Harper government closed 12 of 16 regional offices.4 It also cut funding for over 41 women's organizations.5 These include women’s shelters and advocates for women's health, equality and security. It also cancelled funding for legal challenges to enforce the Charter of Rights and Freedoms.6 Harper pushed a bill through that undermines the principle of pay equity,7 and scrapped the national child care program initiated in 2005.8 Finally, officials have repeatedly brushed off calls for action in response to 1,200 cases of missing and murdered Indigenous women9 and destroyed the federal long gun registry.10

The impacts of these cuts have been dramatic.

When employers pay women 71 cents on the dollar, that adds up to billions in profits from the exploitation of inequality. It adds up to tens of billions of dollars per year that would be paid to women if pay equity was a reality.14

It’s time to act like we value women’s lives and the work they do. This is part of what it means to unite against austerity.

The Harper Government have specifically targeted organizations that advocate for the rights of women. These attacks are part of a right wing vision that sees women doing more unpaid work and occupying low-paid, part-time jobs.

This is also part of an austerity agenda that boosts corporate profits at everyone else’s expense. Women who don't have access to childcare services, shelters or other support are more likely to take a pay cut or stay in abusive relationships in order to avoid falling further into poverty.

Gender inequality and precarious jobs for women, create downward pressure on everyone's wages. This is part of why corporate profits keep going up, while wages for most workers have stagnated.15

Lower wages for women also disproportionately affect children: 21% of single mothers live in poverty. Children living in poor households are more likely to have physical and mental health issues, less likely to develop knowledge and skills, and overall do worse in school.16

While Canada’s arms industry profits at the expense of predominantly Muslim countries, Muslim women are bearing the brunt of fear-mongering and war propaganda. They are subject to profound discrimination in Canadian society and earn a full third less than Canadian women overall.18

In one of the wealthiest countries in the world, these attacks and the resulting inequality are completely unnecessary. But to tilt the scales back to fairness and equality, we have to take action together: sign the petition or sign up to find out how you can get involved.

We value women’s work equally; we care about women’s lives, safety and health; we want all families to have access to affordable child care.

Let’s reverse the cuts, support an investigation into missing and murdered Indigenous women, and recommit to creating a society where women are equal, valued, and free from harm.